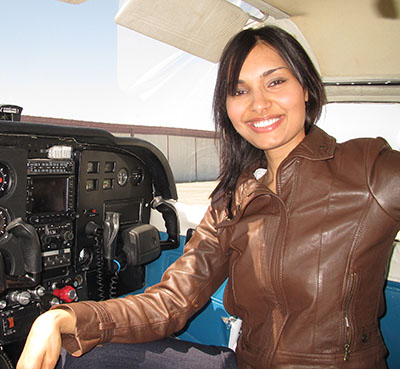 What started off as a dare by her peers at the University of North Dakota, turned into a new found love for Malvika Matharoo - from the moment she took the yoke of a Piper during her first flight in 2005.

In 2007, she graduated with a Bachelor of Business Administration in Aviation Management and soon moved to California. Not long after, she found her way to North Coast Air where she became a Certified Flight Instructor.

In 2009 Malvika realized she wanted more out of her life. Drawing from her unique experiences of being an Indian woman who broke down many old patterns and traditions; Malvika encourages young people, especially young women, to pursue their dreams. Malvika has been featured in the San Francisco Chronicle, Sonoma Family Life Maganize and Arugus Courier to name a few. When Malvika isn’t flying airplanes and/or inspiring young people to follow the lives of their dreams; she loves meditating, painting, hiking, yoga, dancing, being in nature, music, trying out new recipes and shopping!!